We Are Not Forgotten by God

Posted on September 1, 2014 by anthonychristine

When we prayed for something that we know in our heart that this thing is pleasing to God, we have high “hope” that it will be fulfilled. It is the most difficult thing, as time passes, the “hope” did not come to fruition. “Have God Forgotten about Me?”

What have I done to deserve this “punishment” from God?

These are often lies from Satan to question our faith in God. At this time, we should continue to pray and read God’s faithful promises. “But I trust in your unfailing love; my heart rejoices in your salvation. I will sing to the Lord because He has dealt bountifully with me.” -Psalm 13: 5-6

Commentary from “Doctor-Perspective”: “The born-again Child of God can rest assured that God can never forget him. Such a proposition does not even make sense, because, unlike the case in David’s time, God now lives within us through His Holy Spirit. For the same reason, God cannot hide His face from His children, even when we sin.” ==> We should still come to the Throne of Mercy in the Name of Jesus to ask for forgiveness and repent from the sins.

Posted on March 27, 2011 by anthonychristine

later, Jeremiah enjoyed a nice stroll near our apmt garden… 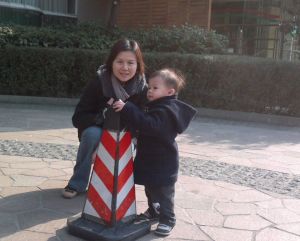 Joke: Why did the Chicken Cross the Road?

Posted on March 21, 2011 by anthonychristine

This is very funny. But, you need to understand US politics and pop culture to appreciate the joke…

“Why did the chicken cross the road?”

BARACK OBAMA: The chicken crossed the road with guns because it was time for change! The chicken wanted change!

SARAH PALIN: The chicken crossed the road because gosh-darn it, he’s a maverick!

JOHN MC CAIN: My friends, that chicken crossed the road because he recognized the need to engage in cooperation and dialogue with all the chickens on the other side of the road.

HILLARY: When I was First Lady, I personally helped that little chicken to cross the road. This experience makes me uniquely qualified to ensure right from Day One that every chicken in this country gets the chance it deserves to cross the road. But then, this really isn’t about me.

GEORGE W. BUSH: We don’t really care why the chicken crossed the road. We just want to know if the chicken is on our side of the road, or not. The chicken is either against us, or for us. There is no middle ground here.

BILL CLINTON: I did not cross the road with that chicken. What is your definition of chicken?

AL GORE: I invented the chicken.

JOHN KERRY: Although I voted to let the chicken cross the road, I am now against it! It was the wrong road to cross, and I was misled about the chicken’s intentions. I am not for it now, and will remain against it.

AL SHARPTON: Why are all the chickens white? We need some black chickens.

OPRAH: Well, I understand that the chicken is having problems, which is why he wants to cross this road so bad. So instead of having the chicken learn from his mistakes and take falls, which is a part of life, I’m going to give this chicken a NEW CAR so that he can just drive across the road and not live his life like the rest of the chickens.

NANCY GRACE: That chicken crossed the road because he’s guilty! You can see it in his eyes and the way he walks.

PAT BUCHANAN: To steal the job of a decent, hardworking American.

MARTHA STEWART: No one called me to warn me which way that chicken was going. I had a standing order at the Farmer’s Market to sell my eggs when the price dropped to a certain level. No little bird gave me any insider information.

JERRY FALWELL: Because the chicken was gay! Can’t you people see the plain truth? That’s why they call it the ‘other side.’ Yes, my friends, that chicken is gay. And if you eat that chicken, you will become gay too. I say we boycott all chickens until we sort out this abomination that the liberal media whitewashes with seemingly harmless phrases like ‘the other side.’ That chicken should not be crossing the road. It’s as plain and as simple as that.

BARBARA WALTERS: Isn’t that interesting? In a few moments, we will be listening to the chicken tell, for the first time, the heartwarming story of how it experienced a serious case of molting, and went on to accomplish its lifelong dream of crossing the road.

JOHN LENNON: Imagine all the chickens in the world crossing roads together, in peace.

BILL GATES: I have just released eChicken2010, which will not only cross roads, but will lay eggs, file your important documents, and balance your checkbook. Internet Explorer is an integral part of eChicken2010. This new platform is much more stable and will never reboot.

ALBERT EINSTEIN: Did the chicken really cross the road, or did the road move beneath the chicken?

COLONEL SANDERS: Did I miss one?

BARACK OBAMA: The chicken crossed the road with guns because it was time for change! The chicken wanted change!

Posted on March 20, 2011 by anthonychristine

Christine, baby Jeremiah and I spent a 5-weeks home vacation in Jan & Feb. We have a great time enjoying the delicious Malaysian cuisine, meeting with family members and friends….

See the photos taken while in Malaysia…

Posted on February 15, 2011 by anthonychristine

Welcome to WordPress.com. This is your first post. Edit or delete it and start blogging!

Posted on December 5, 2010 by anthonychristine
Mother-in-Law visiting us in Shanghai this month. Actually, 外婆是好想要看可爱的Baby Jeremiah啦….
Jeremy got to sit on his new baby stroller (his 3rd one!), a super nice gift from 台北姨婆-陈秋香, and went to the airport to pick up 外婆. 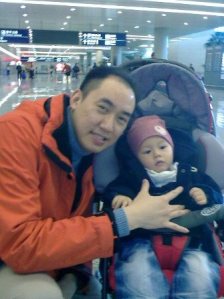 We went to the garden at our apartment to enjoy a nice morning stroll….Pretty cold this morning though….

Posted on September 28, 2010 by anthonychristine
Thanks to God’s Blessings! We celebrated baby Jeremiah’s 1st "Happy Birthday" on Sep 17th at home in Shanghai. Simple cake and "Happy Birthday" song follows with a prayer to thank God for his wonderful grace and providence…

我们的好处不在神以外…上帝的恩典够我们用….For the past 12 months, in fact, since 1st Trimester of pregnancy (Jan 2009), God has used many occasion to protect us.
We learned so many lessons over the past 22 months…
– Having faith in God even though the 1st trimester had many "scares"…Local doctor told us our baby might have 1/20 of probability of having Downs Syndrome…
==> We prayed and submitted to God that no matter what, he is still our child, and we went against doctor’s suggestion by not having the 羊膜穿刺 process.
==> "We will love our baby no matter what…" 生命是上帝给的, every life is precious…
– Huiyi endured almost 47 hours of labor. And finally, baby Jeremiah was born safely at 12:17 midnight on a Thursday at 华山 Hospital. Thanks to God!
See some of baby Jeremiah’s recent photos as he develops many facial expressions and learning to walk: 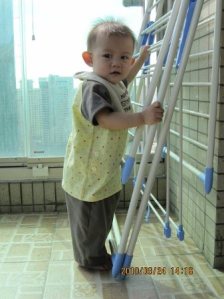 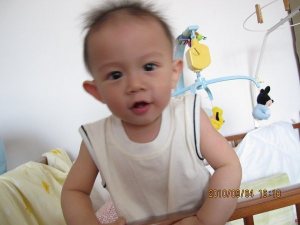 Posted on June 1, 2010 by anthonychristine
Baby Jeremiah is now 8 months old. He has developed many different motions and facial expressions… 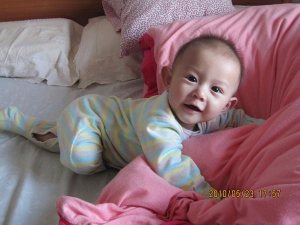 Posted on May 3, 2010 by anthonychristine
Warm weather is here. Finally, after nearly 6 months ++ of Winter in Shanghai, Spring is here. Just in time for the Shanghai World Expo 2010 Grand Opening.
We stayed at home during the May 1st Holidays to avoid the crowd

but the firework show was visible from our 32F apartment at JingAn. Amazing Show! 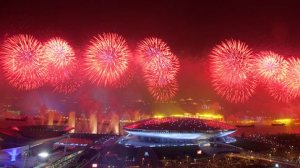 Jeremiah is enjoying his first Spring, and with warm weather, he is enjoying lighter clothing…Jeremy is now 7 month+ old. He is joyful and keeping us all happy all the time!

Posted on March 14, 2010 by anthonychristine
Posted in Latest News about Us | Leave a comment
Anthony-Christine's Blog
Create a free website or blog at WordPress.com.
Loading Comments...